A map of Central North America 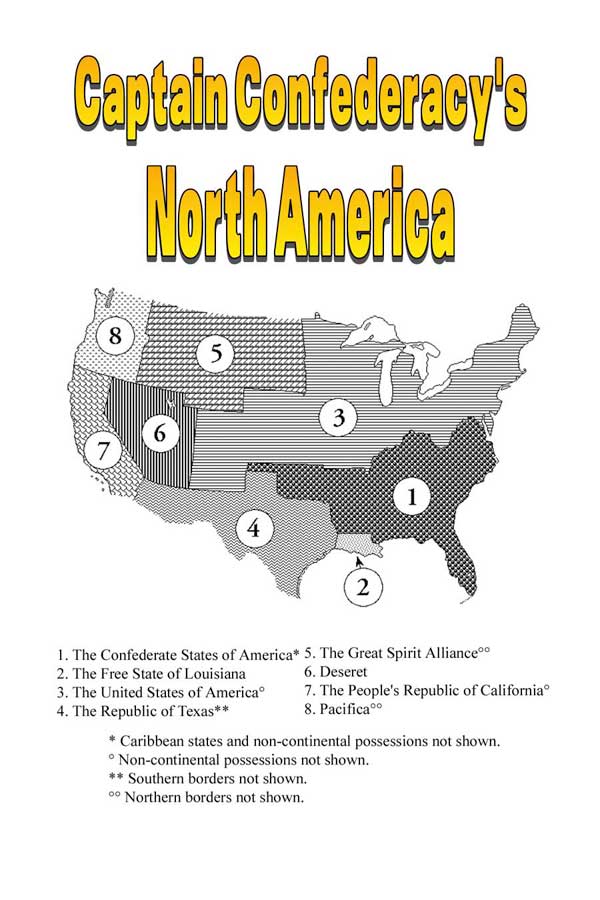 Posted by Will Shetterly at Saturday, January 21, 2006

Now you have me curious about those northern and southern borders!

I don't mind telling you the few things I'm sure of, regarding this North America: Baja California is part of the People's Republic of California. Mexico and Canada still exist, though they're smaller, and I'm not sure what their relationships are with other countries. In the far north is Alayeksa, where the Russian royal family fled.

I lost track of this website/blog a couple of years back. Glad I found it again.

Would you say that the rest of the world is also balkanized? We've seen a German nation, but is there also a Bohemian one? Or is the rest of world more amalgamated rather than less? Free Scotland? Burgundy? Kazakhstan? India divided up into various Raj's? Does the Nippon Empire actually include anything more than the home islands?

Steve, since I never got the story there, I think your call is as good as mine. My first instinct would've been to expand the other empires, but having the occasional free state could've been fun.

I'm turning off comments on this site because I'm moving the blog to here, where I'll start posting the relettered Epic series someday soon, I hope.

Selecting the "here" in your last entry takes you to a notice that the blog has been shut down.

Steve, thanks for noticing that--unlike wordpress, blogger doesn't let me edit comments, so I'll leave the comment alone. I had thought I would move Captain Confederacy to wordpress.com, but after studying the features some more, I decided to stay here. (In general, I prefer Wordpress to Blogger, but Blogger is a little easier for things like paid advertising, which I hope to explore further.)

With luck, I'll resume posting here in about a week.

It has been a long week.

I remember reading this story when it came out, but it is long gone. Any plans for a TPB?

My, it has been a long week!

The first story is in a trade paperback; you can get it from Amazon or Lulu. (See the sidebar.)

And now that I've been nudged, I'll try to start up again. My computer died, and I'm having to learn some new software in my free time.

Have you considered this angle?

None of those nations would’ve been rich or powerful enough to even have the desire to colonize the Pacific islands, including Hawaii. Only Pacifica and the PRC (love how those initials worked out!) would even have the proximity to the Pacific coast to make such a thing even remotely possible (I assume no Panama Canal in this alternate reality?)!

No Hawaii means no Pearl Harbor.

And that means that we’d all’ve been speaking Japanese for the past 70 years. Not German: no powerful USA means insufficient enforcement of the Treaty of Versailles, which means no Hitler coming to power — he likely remained a mediocre artist.

But, IIRC, Japan was largely culturally isolated in our reality until after WWII (they had some earlier contact with the Dutch, but that didn’t work out so well), and so wouldn’t’ve been altered enough in this timeline to have altered their actions circa the early 1940s by all that much.

With nobody to stop them until it was too late, and especially if they developed nukes, things would’ve gone very badly for pretty much everyone else, super-powered propaganda heroes or no.

Japan would not have conquered the world because Japan would not have become that expansionistic. Japan would probably have remained very isolationist without the West. The Meiji revolution/restoration was the necessary change in Japanese culture that set Japan upon its 20th-century expansionism. Meiji never would have happened if Japan had not suffered severe humiliation at the hands of Western nations, especially the upstart USA. With weaker Westerners, and a rump USA, there would have been no Meiji. No Meiji, no Japan as a great power.

my, I could see that argument. I partly went with Japan as a world power because people would recognize it and partly because Admiral Perry's actions in 1854 predated my change in the timeline.